JUNE 25, 2019: Capturing any high-speed motorsport is never an easy task, however when you do happen to freeze frame a nitro-burning Top Fuel motorcycle in the heat of battle, there is a sense of achievement.

“I’ve always enjoyed looking at photos of my bike in magazines and online, especially from those photographers who look outside of the norm. I’ve seen my fair share of the “standard” burnout or launch shot over the years, which is why I really admire those who have the vision to see more, said Matheson.

“The concept of the “Nitro Voodoo” Winternationals Photographic Contest was to open it up to amateur photographers who don’t have trackside media access. They could be sitting in the grandstand, the hill, or in the pits, and yet still capture outstanding photography.

“The picture inside my head is the one past half-track, locked in the heat of battle, with the front wheel off the deck and lots of header flame,” said Matheson.

This year’s contest saw Matheson blown away with the number of entries, and the quality of the submissions.

“We received some great photos from the competition and I have to say it was a difficult task picking the winner.

“Debbie’s photo certainly caught my eyes as it had all the ticks I was looking for.

“It’s certainly not an easy shot”, said Matheson. But when I saw Debbie’s pic, I knew I had a winner.

“Well done to Debbie and I’d like to thank everyone else for their submissions and entering our little competition,” said Matheson.

“I have been taking photos for a few years now and the drags are my passion, said Debbie. “My partner and I both race in the Street Series at Willowbank. So, as you can imagine, we spent lots of time at the track watching our mates race,

“Each Winters for the last three years I’ve been spending time down the end of the track on the spectator mound taking photos of racers at speed. Sometimes it’s all just a blur, but when I realised the finals were between two of my favourite bike racers, I took off back down there and waited.

“To catch both Chris and Jay in the same shot was more than I could have hoped for. To see these two legends in a race within range of each other was way cool. The name I gave it was exactly what I had in my head – “Just a couple of blokes out for a Sunday ride”.

Debbie was an entrant last year and was waiting and watching to see if it would be on again in 2019!

“I have slowly been learning and trying different things with my photography.  It’s a huge challenge to try and capture any high-speed drag racing action. I have so much admiration for these Top Fuel bike guys. They are brave men and have a lot of guts to ride these insane nitro-burning motorcycles.

“I’m over the moon to have won the 2019 Nitro Voodoo Winternationals Photo Contest. I would never have thought I’d win, but at the same time, I’m also happy that I was selected as the winner. Can’t wait to try again next year!”, finished Debbie. 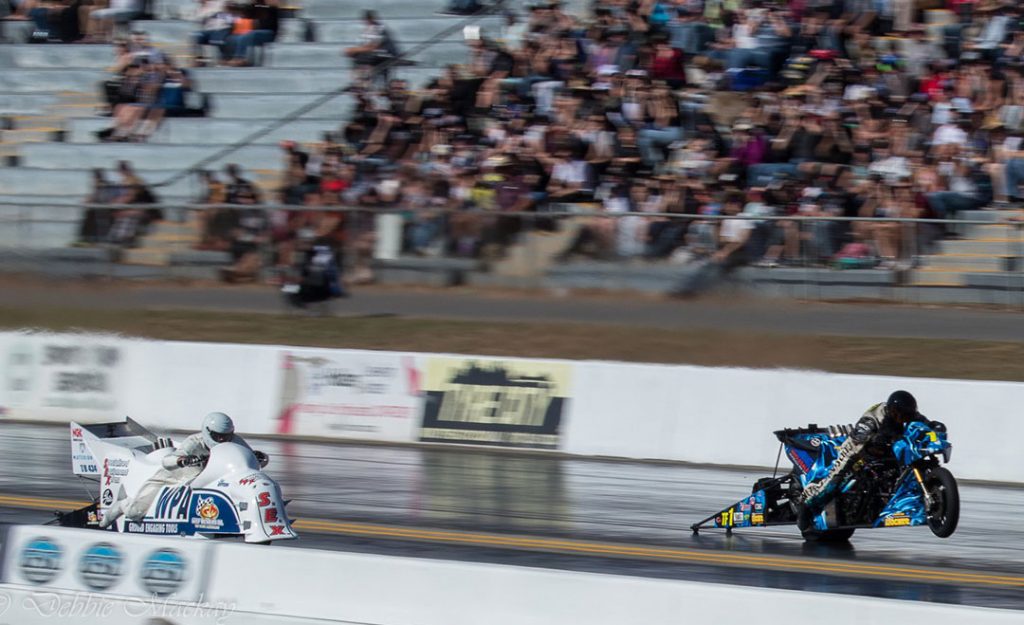