Matheson’s winning success of the six round Championship saw Matheson, and his winning Team, cris-cross Australia – clocking some long distances in their quest to take out the Championship.

Matheson said “we traversed all lengths of Australia in search of our eighth holly grail; another National Championship, and we found it!”

Matheson won the line share of the 6 round series which attracted the best Fuel bikes in the country.

Matheson raised the bar on his own National records clocking numerous 6.0’s consistently across the length and breadth of Australia – rewriting history in the sport including a new ANDRA ET and Speed record

at the fourth round of the Championship in Perth at the Motorplex.

Matheson’s success was highlighted only a week ago when he took out the coveted 54th Australian Winternationals leading up to the final Championship round at Hidden Valley Darwin, Northern Australia.

Unfortunately Matheson suffered an eye injury at the Winters and was unable to compete in the last round – much to the disappointment of Matheson and his Team.

Matheson said “we had a 230 point lead going into the final with only 140 points on offer, so we won our eighth National Championship the last 5 consecutively.As I say, we were looking forward to running Darwin as it would have given us a chance to let loose a little and wind up the power to try for a PB but it wasn’t to be.

The 6.02 we ran in qualifying at the Winters (the week before) really gave us some confidence heading to Darwin which is a good track for speed and ET.”

Matheson holds the track record at Darwin as he does at all the group one tracks across Australia.

Matheson has held the National record on a Top Fuel Motorcycle since his debut some 11 years ago, winning an incredible 8 Championships and has dominated the sport in Australia, like no other before him.

Matheson went on to say “we love the challenge of these bikes and hope we inspire the next generation of young motorcycle enthusiasts to follow our path and one day rewrite their own history, keeping the sport alive.

I would like to make a special mention to my winning Team who have made our goals reality. Phil OBrien, Mick Mackay, Jamie Mcinley and J Pac. My wife, family, all our sponsors, supporters and of course… the people we do this crazy sport for – the fans.” 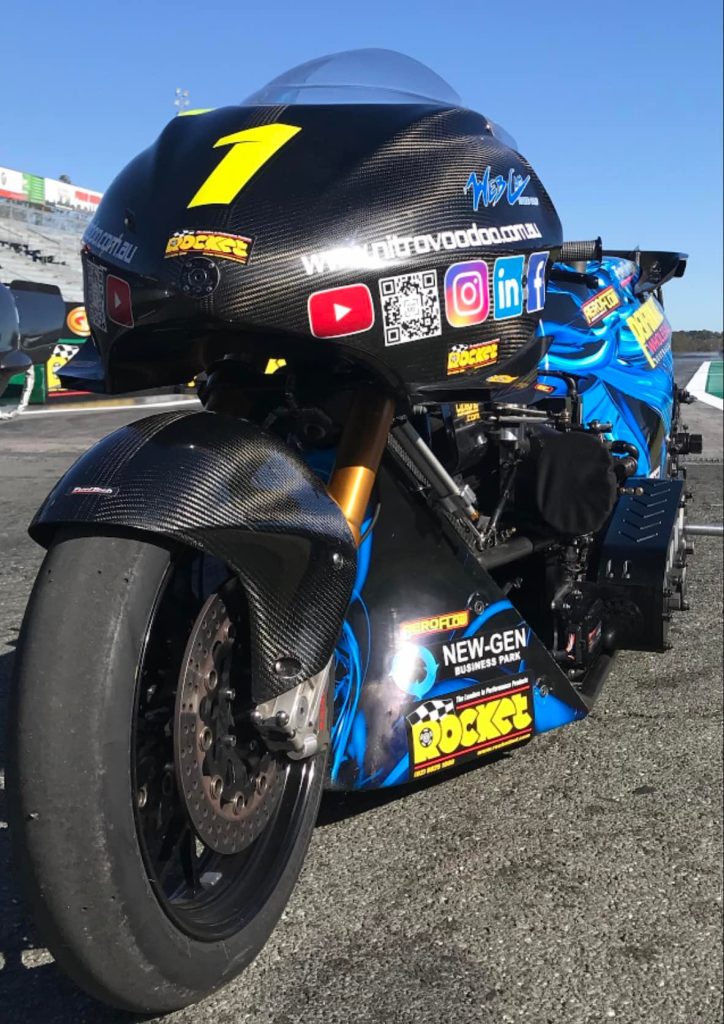