March 31, 2018: With no Top Bike championship points on the line at the Santo’s Super Thunder event, Chris Matheson and his crew were able to focus on the “Nitro Voodoo” Top Fuel Motorcycle and attempt to make his bike respond quicker.

“We figured this event was the perfect opportunity to try out a few things, said Matheson. It was great to put on a show for the fans, but we also wanted to get the bike moving faster in the first half of the track.

“After our last win at the Mac Track Westernationals in Perth, we picked up a solid lead in the Top Fuel Bike Championship, so match racing against local hero Gavin Spann took some of the pressure away.”

“It’s hard to believe after all these years, we had never raced together,” said Matheson. He’s a legend on two-wheels and I have the utmost respect for him, and his long career in the sport of drag racing.

“However that stopped when the Christmas Tree lights came on,” grinned Matheson. We had a best of a three-match race on the table and I wanted to win!

“Nitro Voodoo” came out during the afternoon test session. On a solo and chomping at the bit, Matheson was ready to tackle the sticky track having seen how much traction was on the strip. The bike went for it with an aggressive launch, but spun the tyre before the tree with a 1.2 60 foot, then buttoned off and coasted to a 13-second pass.

The first paired run saw Matheson and Spann come out just as the sun was setting on their faces. On the launch, Matheson was out clean, but buttoned off and watched Spann take the win light.

“We were testing a new clutch gear combo and doing launches to try to improve our short times,” said Matheson. “The track was really good and we gained some useful data to try and improve on the bikes early increments.

The second paired run saw the “Nitro Voodoo” machine leave hard but head towards the centerline. The bike was very quick to half-track in 4.11 seconds, however as hard as he tried Matheson couldn’t stop from crossing the stripe and smashed the timing blocks. Thankfully Spann was off the throttle early and had the chute out.

“That was a nail biter and one hell of a wild run,” said Matheson. “We wanted to get the bike to run harder in the first half of the track and that run really got my attention. It happened so quick, and before I could do anything, I was heading to the centerline. No matter how hard I moved my body around to compensate, I was in Gavin’s lane. I was just thankful that he was off the throttle early.”

The final pass saw the nitro header flames light up the sky with Matho having two stabs on the throttle before shutting off.
“On the 4.11 pass it was on 3 cylinders only, so we made a fuel adjustment for that cylinder on the last pass. Unfortunately, we were too aggressive and just overpowered the track smoking the tyre at the hit.

“It was a tough day in the office,” said Matheson. We ran our best 60ft in years, but it’s still not as quick as the bike will go. The early part of the track is critical to push the ET down, so we’re looking forward to Sydney to continue the development of the bike.

Congrats to Gavin for lining up against me and taking out the best of three. Let’s not wait another 8 years to do it again,” laughed Matheson.

The next event for the “Nitro Voodoo” will be the 4th & 5th May at Sydney Dragway for the Gulf Western Oils Nitro Thunder event. 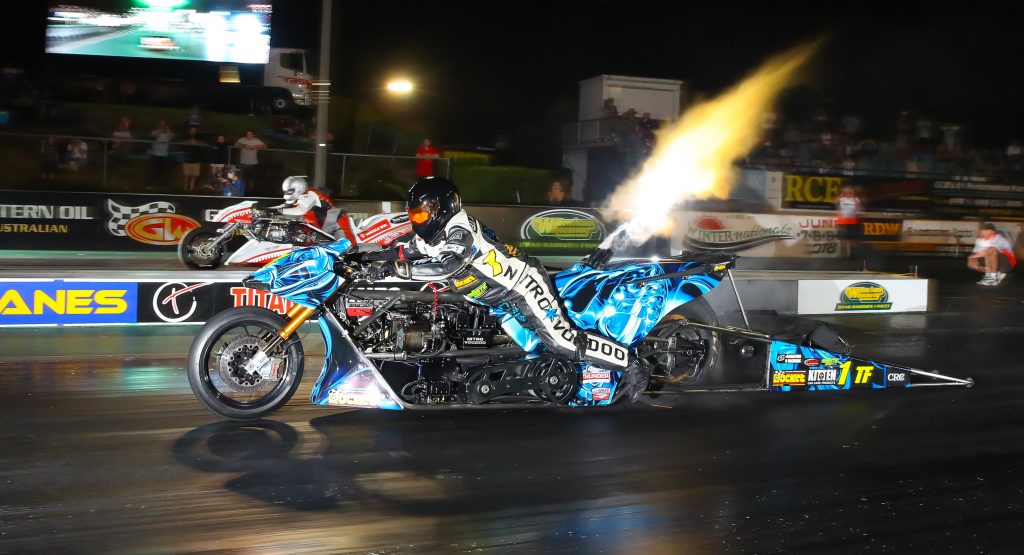