May 22, 2018: The first time Chris Matheson brings his 1500 plus horsepower “Nitro Voodoo” Top Fuel Motorcycle to the start line at the 2018 Gulf Western Oil Winternationals, he will officially have wrapped up his fifth Australian Top Bike Championship. This is an accomplishment that will go into the drag racing history books and could well be an achievement never to be repeated again in Australia!

Looking back through the Aussie archives it’s noted since 1992 Top Bike has seen a number of three-time champions, however, only three riders have gone three straight. The first was Bill Curry (1992, 1993 & 1994) and then Ian Ashelford on his Harley-Davidson from 2001 to 2003.

Matheson cleaned up with wins in 2010 as a rookie, 2011 and 2012. It could have been four straight, however, a terrifying crash in 2013 at Sydney Dragway saw the Queenslander drop out of the championship to recover and rebuild. Regardless, Matheson still finished second despite having missed out most of the season.

“Winning championships have always been a goal for myself and the team,” Matheson said. Right from the start, I wanted to see my name in the record books alongside other Top Bike greats such as Peter “Pom” Allen, Bill Curry and Ian “Single” Ashelford.

“As a businessman, I understand the importance of being the best you can. It’s what I do day in and day out and it’s no different when I go racing. Every time I’m on the start line I go to win, break records and win championships.

“Winning a fifth Australian drag racing championship sits special with me. It’s been a goal of mine since I hopped on “Nitro Voodoo” and went professional drag racing some eight years ago.”

Matheson’s next goal is to break into the five-second barrier, something that has been achieved in the United States and Europe, but never in the Southern Hemisphere.

There is no doubt Matheson wants to be the first to run into the fives on two-wheels in Australia.

“I have run my best numbers right here at my home track – Willowbank Raceway. It was back in 2013 at the Santos Cranes Super 3 Extreme drag race that I went 6.04 at 241 mph [387 kph]. That was also the same year I crashed experiencing both the highs and lows of this sport. Since then we have run multiple 6.0s, but yet to drop into the magic fives.

“I used that recovery time to rethink our package and built new billet engines that would take us to the next level,” said Matheson. The increments we picked up in Sydney earlier this month certainly showed that we are on the right track. The bike has enormous untapped potential. It’s a monster lying in wait?

“Racing this time of the year can be tricky especially at night, but the format at the Winternationals is different with daytime runs,” said Matheson. Along with the renowned sticky surface, we are pumped to get out there and smash our own national records that have stood for several years.

“The 51st Winternationals is the biggest and best event on the Australian drag racing calendar and we would like nothing more than to make it a memorable one for the fans and my sponsors.

“This bike is a proven five-second runner. When I purchased it from Jimmy “Hulk” Brantley and Larry “Spiderman” McBride in the US, it was only the second bike in the world to record a five-second pass behind Larry’s effort way back in 1999. Brantley went on to run a career best of 5.8 seconds, before Matheson loaded the bike into a container, and had it shipped to Australia in 2009.

“We don’t want to run a 5.99, grinned Matheson. We have certainly run faster than the bike has ever gone, but we want to go quicker. I’m lucky to say that I know both Larry and Steve McBride as friends. The knowledge and advice these two have is amazing and they want to see me run fast and get into the fives. They both were super excited with our incremental times in Sydney and believed the potential is there for a solid 5-second ET,” finished Matheson.

Nitro Voodoo will be testing at the Winternationals Warm Up on June 2nd & 3rd so stay tuned! 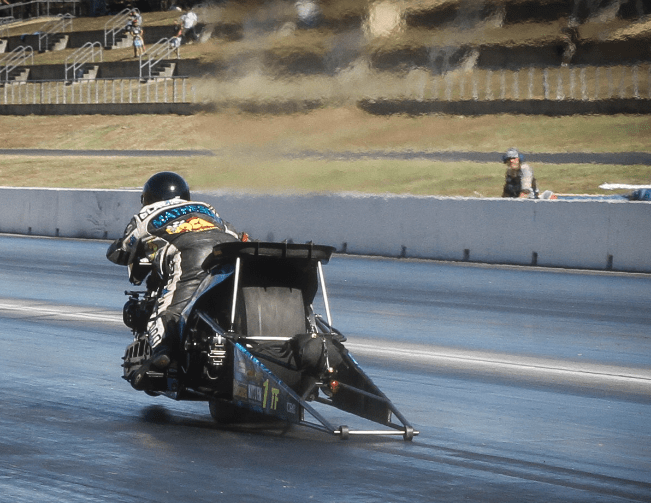