January 10, 2018: Australia’s number one Top Fuel Motorcycle racer Chris Matheson is counting down the days until the Santo’s Summer Thunder round of the Australian 400 Thunder Championship on January 19 & 20.

As a warm-up to Sydney, Matheson featured at the recent New Year Thunder event at Willowbank Raceway (Jan 5 & 6) in a nitro duel alongside Australia’s quickest and fastest Harley-Davidson rider – Mark Drew.

The event was a scorcher with high track temps (over 65 C) making it tricky for the two-wheel nitro burners. The pair made a number of runs over the two days with both riders experiencing some issues. On one particular solo run, things got ugly for Matheson around the 400-foot mark with a spinning tyre suddenly grabbed traction and tried to throw him off his bike.

Drew and Matheson squared up later for a paired run with a solid 6.23 effort for the “Nitro Voodoo” machine, while Drew left hard and carried the front wheel before dropping a cylinder and slowing to a 7.67 ET.

“We were hoping to put down some quick runs for the fans,” said Matherson but gremlins caught up with the both of us. I was impressed with the crowd that came out under the very hot conditions and the number of young kids in the pits and grandstands was fantastic.

Mark went 6.59/208 in testing running a new fuel system and I managed that 6.23/206. I had intentions of coming out again later in the night, however as we started getting ready to tow the bike out we noticed a few drops of oil, so pulled the pin.”

Besides the issues for both riders, Matheson said,” The bike came a long way in the 60-foot department. It clocked a 1.09, which is something we haven’t seen for a long time.

“We are looking to pick up three to four tenths in the middle. I can see some light at the end of the tunnel. Since upgrading our package we threw everything we knew out the window and basically started again with a clean sheet.”

“The fruits of our labour are starting to show so we can’t wait to get down to Sydney in a few weeks.

“On a very sad note, I was taken back to hear Australian Top Bike racer Phil Parker passed away earlier this week. Phil was a true Champion of our sport both on and off the track.

I have many fond memories of racing with Phil (seen above), his never give up attitude was second to none. Phil and his devoted team ran a number of great passes over his career none more satisfying than his 6.58 ET in Sydney. I recall the jubilation on his face at the deep end.

Phil was a great person, always positive, willing to help and a tough racer. A true shining star sadly missed. My thoughts go out to his family and friends. 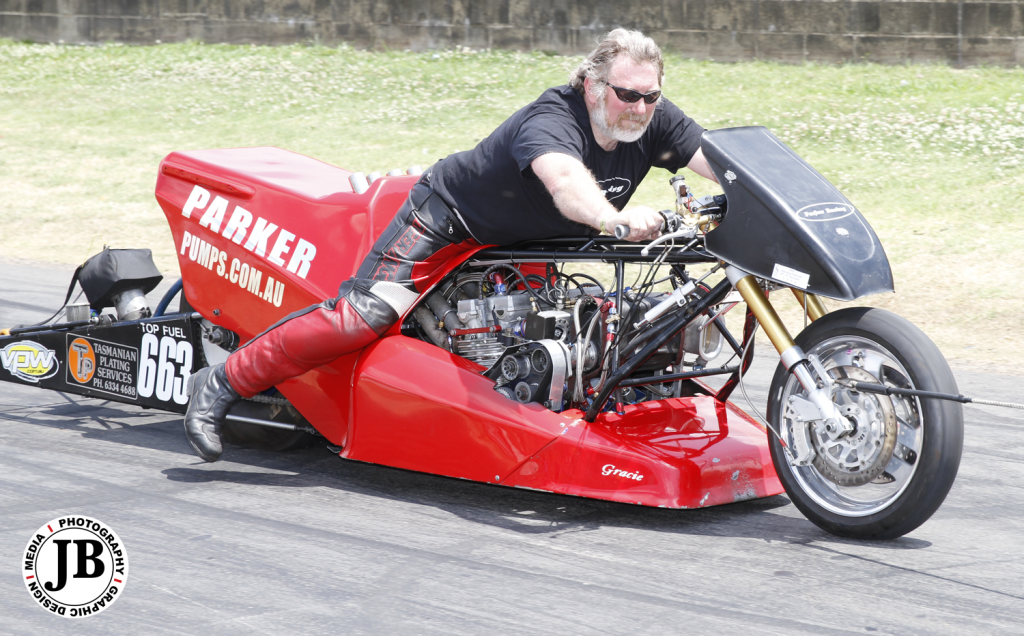